The writing continues to go well, 5200 new words total last week on various projects. I also made some more dents in my goals, and on Monday I started a series of articles on my blog for beginning indie authors. You can read the first one here. In connection with the blog posts about self-publishing, I have also decided to declare Mondays my official marketing day, so that I will finally get back to actually trying to sell my books again. Wish me luck. 🙂

On to WIPpet Wednesday. Today I’m giving you the final section of the scene where Taliesin and Kustennin have been led into Cerdic’s presence, following directly after the excerpt I gave you last week. It’s about 30 sentences, if I counted right, thus 23 + 7 for today’s date:

Kustennin stared at her, wondering where she got her powers. It was clear that Cerdic had none, or else he would not need his daughter’s assistance, so they must come from her Saxon mother. But he knew so little about Saxon religion, magic, culture. He would have to rectify that — it did not do to be ignorant regarding your enemies.
“Are we now free to play our songs in your city, Lord?” Taliesin asked.
Cerdic nodded. “But see to it you sing no more songs of Arthur.”
“I have one of the rebel hero Medraut,” Kustennin said. “Would you like to hear that?”
“You sing songs both of Arthur and Medraut?” Cerdic said, laughing. “Are you not aware they were enemies?”
Taliesin shrugged. “Art is promiscuous. To me they are all stories, Lord.”
Still laughing, Cerdic waved them away. “Go, sing your songs and earn your bread, bard. I think you will find the people of Venta generous.”
“Thank you.” Taliesin bowed, and the rest of them followed suit. “Is there anyone besides Arthur who I should not sing of?”
“No, just Arthur.”
“Very good, Lord.”
They left Cerdic’s hall, and stepped out into the autumn sunshine. Nearby, several city blocks had been cleared of whatever Roman buildings had once stood there, and bearded warriors with Saxon round shields and long spears battled against each other, their grunts and the sounds of their clashing weapons filling the air.
“Do not tarry too long,” Taliesin murmured in his ear.
Kustennin nodded shortly, watching the warriors at practice surreptitiously as he followed the bard with the rest of their party. While part of his mind tallied the number of warriors and analyzed their probable experience and strength, another was still concerned with Nerienda and the mystery of why she had covered for them. Why would she want Kustennin in her debt? Perhaps she had not been a willing pawn in her father’s ambitious schemes after all? 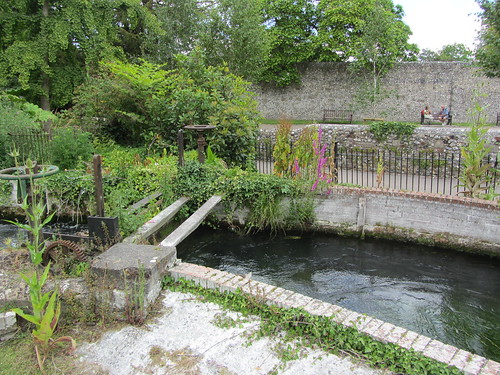 Part of the Roman wall in Winchester, with the River Itchen in the foreground

30 thoughts on “Questions upon questions for #WIPpet Wednesday”