Note: I’ve long wanted to participate in one of Chuck Wendig’s Friday Fiction Challenges, but somehow I never seem to have the time. This week, I’m a bit ahead of myself, and I decided to give it a shot. This on the 1st “fourth” of a story — which someone else should take up next week! If you want to play and see how it works, check out the rules here.

And now for my open beginning:

“I’m not going back to Germany.” Deirdre scuffed the damp sand with her white Reeboks, erasing a random dog print. “There’s nothing there for me anymore.”
“But what about your job?” Mandi asked.
As opposed to Deirdre, Mandi had never left the Oregon coast. Now, just shy of forty, she looked as if she had become part of the landscape. Her long hair, beginning to gray, was frizzy from regular walks on the beach, and her long linen dress was tye-died in shades of sea and sand and driftwood. In the decades they had known each other, her figure had gone from skinny to comfortable. Deirdre envied the way she seemed so at home in her own body, in her self.
“I quit,” Deirdre said. “I wrote the letter this morning.”
The moisture in the air was somewhere between a heavy fog and a light mist, obscuring the coast with wisps of gray and leaving only the edge of the water visible to the eye. Clouds of fog moved in the breeze, transforming the landscape from moment to moment, hiding one feature and revealing another. There was little wind, but it was cool and damp. It was late summer in the rest of the world, but the Oregon coast had its own seasons.
They walked through the sand in silnece for a while. “A bit radical, don’t you think?” Mandi finally replied. “I mean, you have it pretty cushy over there in Germany. Four weeks of paid vacation, plus. A functioning health care system. A lot of people would envy you.”
“Yeah, I know — but I’m homesick anyway. Besides, everything there reminds me too much of Torsten.” Oh, how she hated the way her voice broke when she said that.
They were walking into the wind, and Deirdre pulled her parka tighter. Beside her, Mandi had her funky leather coat buttoned up to her chin. A rocky outcrop took shape ahead of them through the mist, and the hotel on the bluff loomed above them to their right.
Mandi took a deep breath. “I know you don’t want to hear this, Deirdre, but you really need to consider dating again.”
Deirdre shook her head. “I’d rather hang out with my sea lions.”
The sea lions of Siletz Bay were a comfort to her. In good weather, she would sit on a log in the graveyard of driftwood near the end of the bay and watch them for hours at a time. She had even started giving them names — although she had to admit that she wasn’t sure if she was always giving the same names to the same sea lions. She wasn’t exactly an expert where sea lions were concerned.
“Yeah, well,” Mandi said with an exaggerated grimace. “You know what I think of that particular hobby.”
“Avoidance strategy. But hanging out with the sea lions gives me peace of mind. And I thought you were the one who was so keen on healing and inner harmony and all that, huh?”
Mandi shoved into her shoulder playfully. “Sure, you need that too. But you also need to learn to let go. You’re doing the same thing with your mother’s house.”
No kidding. But how, how did she learn to let go? “I’ve gotten rid of most of the furniture now.”
They came around the outcropping of rock, and the overpowering stench hit her like a fist to the stomach.
“What the hell!”
The smell was like the contents of the sea, emptied out and rotting: more than a scent, a physical thing. It took her by the throat, plunged to her stomach, and made her gag. She ran away from it, towards the ocean, and fell to her knees in the wet sand, coughing.
“What — was — that?” Deirdre choked out.
“It’s a dead sea lion,” Mandi said, taking deep breaths of air far away from the stench behind them.
A sea lion. She leaned over, her hands resting on her knees. Tears from her dry heaves and things she didn’t want to think about mingled with the mist in the air and the salt of the surf. One of her knees had grazed a rocky protrusion from the outcropping and her jeans were soaked, but none of that mattered.
Mandi knelt down and put her arms around her. “You okay now?”
“Yeah, I think so.”
Deirdre wiped her cheeks and looked up. A sea lion bobbed up near the shore where she knelt, dark and sleek, staring at her with his brown, brown eyes. His gaze was steady. She took a deep breath and smiled. Perhaps it was one of the ones she had named, one of the ones she had spent her last few weeks with as she walked the beaches of her former home, looking for something to hold on to.
The sea lion gave a very human-sounding grunt and dove below the surface again. 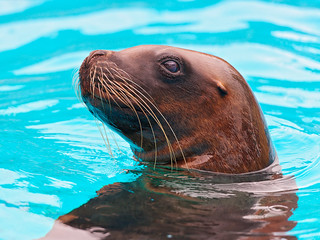