Usually I try to post every year on the death date of Aphra Behn, the first professional woman writer in the English language. I missed it this year (April 16) for a number of reasons, the main one being that I was preparing for the Villa Diodati Workshop, reading stories and writing critiques.

But I have a consolation prize this week: for those who have not yet read it, my time travel based on the life of Aphra Behn, Chameleon in a Mirror, is on sale for only 99c on Amazon until April 28. 🙂 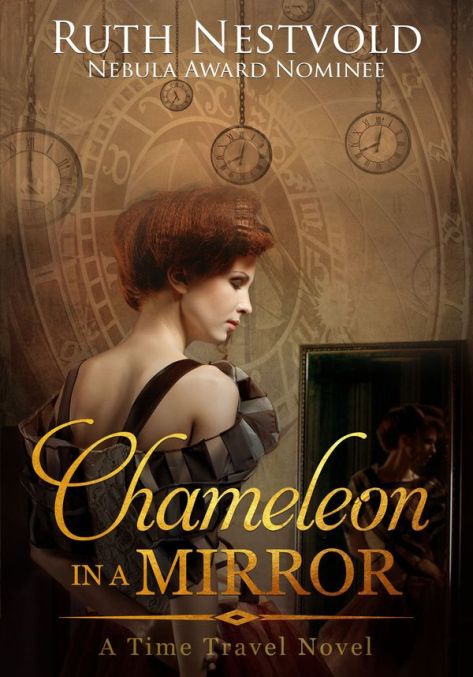 Here’s a short excerpt, based on an incident from Aphra’s life:

Aphra entered the playhouse with more confidence than she felt. The portly playwright, poet laureate of the realm, was giving instructions to the actors and actresses. “Wait here,” she said to her maid. Katherine nodded.
She approached a dark-haired woman standing on the side of the stage. “Prithee, can you tell me where I might find Thomas Killigrew?”
“He’s not here right now, lass,” the actress replied. “But if you want a part in the play, you can speak with Mr. Dryden.”
Aphra felt a surge of sick disappointment. “Nay. I wanted to give him this.” Aphra took the linen cover off the basket she was carrying and pulled out a feathered headdress. The actress gasped.
Aphra’s courage returned. “I brought it and several others back from America. I heard the King’s Company was staging a play where they might be of use.”
“The Indian Queen,” the actress murmured, taking a colorful feather between her fingers. “They would be perfect.”
The playwright joined them so abruptly, they were both startled. “What is the attraction here, Mrs. Marshall? There is work to be done!”
“I had no lines, Mr. Dryden. And you must see what this young woman brought — perfect for The Indian Queen!”
Dryden took the headdress from the actress’s hands, staring at the clever arrangement of colorful feathers. “This is incredibly good,” Dryden said, looking up from the feathers and into Aphra’s face. “Where did you get it?”
Aphra made a hurried curtsey. “I am fresh arrived from the colony of Surinam, Mr. Dryden. I brought the headdress with me, and several others as well. I also brought an assortment of unusual insects …”
Dryden waved his hand in a gesture of dismissal. “You can present those to His Majesty for his zoology collection. But this … this we could use.”
“I would be happy to present them to your company.” The words nearly stuck in her throat in her excitement. “When are you expecting the master of the company, Mr. Killigrew?”
“He did not plan to come to the theater today, to my knowledge,” Dryden said, and Aphra’s face fell. “If you leave the headdress with me, I will give it to Mr. Killigrew.”
“I had something particular to give him,” Aphra stammered.
“I am one of the shareholders of the company, Mrs. …?”
“Johnson.”
“I will make sure it gets to Mr. Killigrew.”
Aphra pulled a sealed letter out of her basket, along with the painstakingly copied manuscript of The Young King, and handed them to Dryden. “This is a letter of introduction from my foster brother, Thomas Culpepper, and a play I wrote while I was in America.”
“A truly American play,” Dryden said with a sarcastic smile. “Not like our London Indians.”
“Oh no, nothing of the kind,” Aphra hastened to reassure him. “’Tis based on a classical precedent!”
Dryden raised his eyebrows but said nothing.
The actress shook her dark head and smiled. “The times are changing, are they not, Mr. Dryden? Women are already actresses. Perhaps playwrights next?” Dryden didn’t look pleased, and Mrs. Marshall gave Aphra a conspiratorial wink.
“I will give these to Mr. Killigrew, Mrs. Johnson,” Dryden said in a tone of dismissal. “Good day.”
“Good day, Mr. Dryden, Mrs. Marshall,” Aphra said curtseying, and turned to leave.

The actress and the playwright watched the copper-haired woman and her maid leave the theater. “A woman playwright would be quite a novelty, would it not?” Anne Marshall said, baiting the playwright, not well-liked among the actors.
“That it would,” Dryden agreed.
“Enough of a novelty to mean serious competition?” the actress added, a malicious gleam in her eye.
Dryden glanced through the pages of fine handwriting, quickly skimming a passage. He was relieved to see that the writing was bombastic and artificial, and although the public was often pleased with much less these days, he probably would have little difficulty persuading Killigrew not to take it. “Only if she wrote better than this one does,” he said. “Come, Mrs. Marshall, it will soon be your entrance.”

One of the things I love about Aphra Behn is the way she managed to succeed despite the odds. 🙂

2 thoughts on “Aphra Behn and Chameleon in a Mirror”