One of the advantages of my recent trip to Oregon and Washington was that I was finally able to meet fellow writer and collaborator Judson Roberts in person. It so happens that he lives less than an hours’ drive away from my father, so we went to his house one evening for dinner. 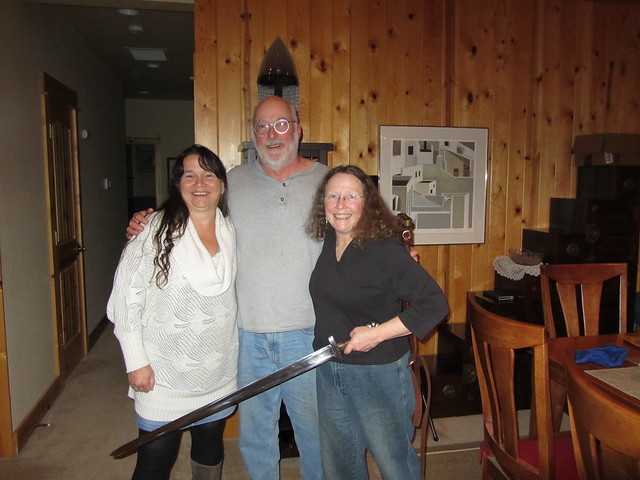 Me, Jud, and his wife, Jeanette

They fed us venison and showed us around their farm, where we met the energetic dog and the berserk duck (r.i.p). And it’s funny how meeting in person gives the whole project a much more personal feeling. Virtual isn’t everything.

Jud and I know each other from the Codex Workshop, and a while back, he persuaded me to translate his book Viking Warrior into German — as a collaborator. Part of the deal is that when he publishes the German books, I am listed with him as author. I get a lower advance for the translations, but a higher percentage of the royalties. 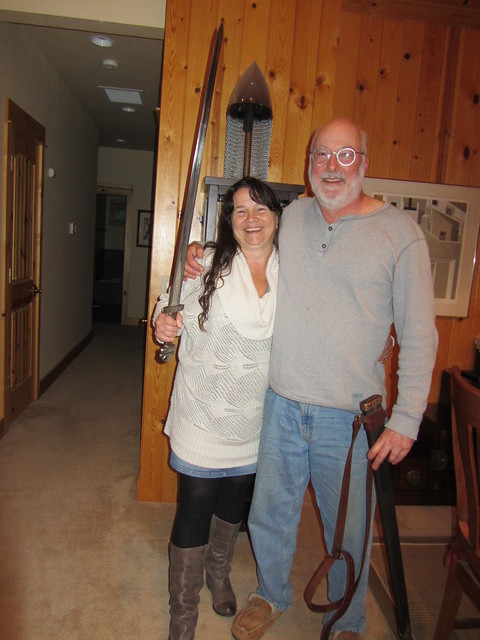 Since my name is also on these books (or rather, on the first one until now, Ein Krieger der Wikinger), it’s especially important to me that the translation is as good as I can make it. That in turn, however, slows down the translation process. I find myself doing a lot of research into Viking terms and historical figures of the period and have acquired several books on the subject. 🙂

Right now, I am not quite halfway through the second book, Dragons From the Sea / Drachen aus dem Meer. We have a lot of visits from the States scheduled for the summer, but I’m still hoping to get the translation done by October. Then my husband will still have to proofread it. If he and I can stay on schedule, the next book can hopefully be published in December this year. 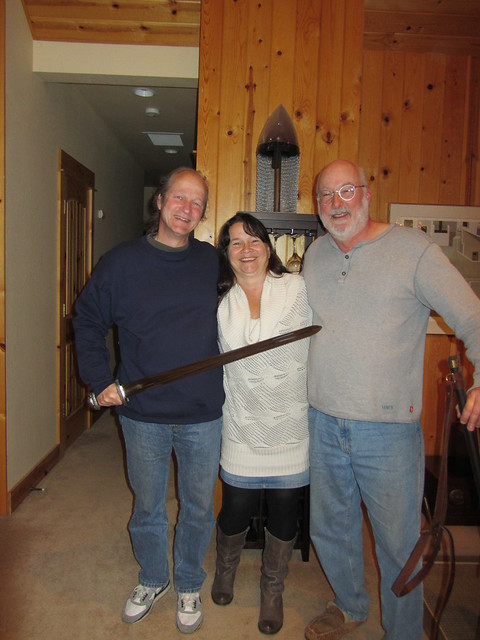 I wonder what Chris REALLY thinks about all that proofreading …

As many of you have noticed in previous weeks, many of the motifs in Facets of Glass come from the fairy tale Snow White. But just as I used the motifs from Cinderella in very different ways in Island of Glass, so too in this book. It is not a witch who brings the apple to Minerva, or even the Evil Dowager Princess, it is the unsuspecting member of the Foscari House Guard, Gaetano. In this excerpt, which comes a couple of paragraphs after the one I provided last week, Gaetano is starting to suspect something after all. My math for 3/4: 3 + 4 = 7 paragraphs:

With Guilia gone, he took one of Minerva’s hands and gazed into her beautiful young face, quiet now, no longer vivacious. She lay stretched out on the floor, seemingly asleep, one arm flung wide away from her body. Gaetano recalled all the uncharitable thoughts he’d had about her when Dowager Princess Zilia asked him to bring her the gift of the apple.
Why had the smelling salts not worked? Could the apple have something to do with it? The gift he had brought?
At the thought, he glanced at her hands, but her palms were open. When she fainted, she must have lost hold of the apple. But there were no shards around her prone figure, so the apple had presumably rolled away.
The surgeon hurried in and took Gaetano’s place at Minerva’s side. The medicus was followed by at least a dozen family members, wringing their hands and making a worried racket.
He stepped back and watched the proceedings, hoping that the Signorina would soon be her normal lively self again — as superficial as he thought her vivaciousness.
But he had never before been offered refreshments by his superiors during his normal duties.
As Gaetano surreptitiously left Palazzo Dragoni, he worried about the role he might have unwillingly played in Minerva’s fainting spell. The thunk of her head as it hit the floor of the palazzo echoed through his mind on the trip back to Venice.

On to the weekly progress report. I have a head cold, and as I am not one of those people who works well with a stuffy head (who is?), my word counts have gone down again. Add to that the next big translation project which came in on Friday. What it adds up to is that I am no longer flirting with 1000 words a day. Instead, I’m adjusting my goals downwards to 500 words a day. But since I had trouble even getting that done during the last big translation project, my main goal will be to find a better balance with this book. Up until now, I seem to be achieving it. Since I started on this Viking translation, I’ve been getting 400-500 words a day written as well. As long as I can continue to make consistent progress on both my own projects and the translation, I will be okay with that.