Starting Out as an Indie Author has finally been published as an eBook! It took me longer than I expected, but then, what doesn’t, right? 🙂 It’s available now at most major retailers:

You can find other retailers on Books2read: books2read.com/u/4jKvPY

For the month of March, I’m offering a special introductory price of only 99c to get the ball rolling. I can’t reduce the price on Kobo yet, however, because I signed up for a promo where the minimum price must be at least 2.99. Writing this blog post, I also noticed that the sale price has not gone through everywhere. Soon, I promise!

Here’s the book description and table of contents:

Starting Out as an Indie Author
A Beginner’s Guide to Preparing, Publishing and Marketing Your EBooks

Have you written your first book and are considering self-publishing? Perhaps you have started looking into the possibility and are feeling overwhelmed by all the options, all the things you need to do and learn in order to become an indie author? Or maybe you aren’t even sure yet whether self-publishing is for you or not, and you want to find out more of what is involved before you decide.

STARTING OUT AS AN INDIE AUTHOR was written for beginning self-publishers and covers the basics on where to sell your books, formatting for eBook and print, and developing marketing strategies. It includes a number of step-by-step instructions for everything from cover design, to setting up eBooks for various distributors, to creating ads with Facebook and Amazon Marketing Services. In addition, there is advice on any number of topics: eBook pricing, using distributors, how much to spend on self-publishing, and writing blurbs for your books.

With this sanity-saving book as a guide, you will have a much better grasp on what is involved in self-publishing and will be able to approach the task realistically and with eyes wide open.

Including an interview with Kate Sparkes, author of the bestselling Bound series!

Part II: Getting Ready to Publish
Chapter 4: Why Editing is Important – and Who can Probably Skip the Expense After All.
Chapter 5: Preparing Your Manuscript for eBook Retailers
Chapter 6: Cover Options for Indie Authors
Chapter 7: Writing Blurbs and Descriptions for your Books
Chapter 8: Amazon Delivery Fees and Reducing the File Size of Your EBook

Part III: Publishing Your Book
Chapter 9: EBook Pricing
Chapter 10: To KDP Select or not to KDP Select
Chapter 11: Using Distributors for Getting into Online Bookstores
Chapter 12: The Importance of Keywords
Chapter 13: Formatting the Interior of your Book for Print
Chapter 14: Creating a Wraparound Cover for your Print Book

Part V: Final Thoughts
Chapter 21: Why “Write the Next Book” isn’t Enough; Or: What to do if your Books aren’t Selling
Chapter 22: Rolling with the Changes

If you’ve enjoyed the series here on my blog, please do share and spread the word. 🙂

Ever since I started going indie and publishing books on my own rather than through a traditional publisher, I have been using Scrivener to create the epub and mobi files required by most retailers. Okay, not ever since — my very first experimental attempts were uploading Word docs to Amazon and Smashwords, and they were resounding failures. But once Scrivener added epub export to its many wonderful writing tools, that is what I have been using as my default e-book formatting program.

I have a new program for that now: Vellum.

Vellum is beautiful — and expensive. And it only works on a Mac. I am a PC user — pedestrian, mundane, and mostly immune to the Apple Cult. My smartphone is a Samsung. Hardware is not a status symbol for me. Yes, Apple makes pretty hardware, but it is outrageously expensive and somehow lives almost on reputation alone, which I find mildly baffling.

But — I broke down and bought my first MacBook back in the day when Scrivener was only available on the Mac. I have been a devoted Scrivener user ever since — and was incredibly relieved when Literature and Latte finally brought out a version of Scrivener for Windows. Oh joy, I would never have to use a Mac again!

Fast forward almost a decade — and me drooling over the beautiful e-books of some of my colleagues created using Vellum. So I finally broke down again and bought a refurbished sleek and shiny little MacBook Air on sale. And it really is amazingly lovely, I have to admit — even though I’m not a Mac fan. 🙂 I would much rather carry it around than some designer handbag. If only it acted a little more like a PC …

I haven’t used Vellum a lot yet, but it seems to be fairly straightforward, with a minimal learning curve (except for the fact that it is on a Mac). Not only does it create very professional looking e-books, it will generate different e-books for a number of stores simultaneously (iBooks, Kindle, Kobo, Nook, Google Play), so you don’t have to do that yourself. And if you use an aggregator like Draft2Digital or Smashwords, it also has a “generic” epub option. It does involve some setting up for the various retailers, but once that is taken care of, you can compile the e-books for all the stores where you sell your books at once.

There are several styles to choose from, designed to suit different genres. 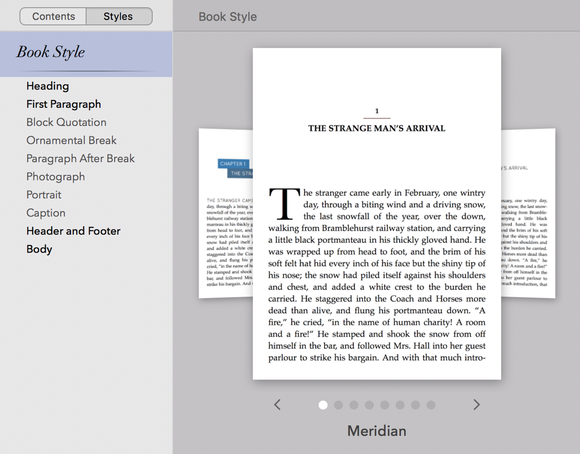 Once you have chosen a style, the final formatting recognizes simple scene breaks like *** and transforms them into into the ornamental break associated with your choice.

I have only uploaded one book formatted with it so far, and I had some problems with the file for Kobo, so I am definitely not the expert. I intend to switch over anyway, though, gradually replacing the files for all the books I have already published. Unfortunately, Amazon doesn’t seem to update the look inside feature with the newer, prettier e-book format, so one of the advantages I had hoped for is gone. But at least in future, my newly published ebooks will look more professional. And if they ever add a print function, as they claim to be thinking about, that would be a huge time-saver. (You can read about how I format for Print on Demand here.)

If you found this blog post helpful, perhaps you would be interested in the book, Starting Out as an Indie Author! You can learn more here.

If you’re interested in learning more about Vellum, here are some links to folks who are savvier regarding the program than I am (and have images to share *g*):

Review: Vellum, the ebook generator for Mac with added prettiness