Last round, I had a hard time getting back into a regular routine after the extended visit to the States. About the only thing I was able to keep on track with in accordance with my goals was the translation.

As a result, my main goal for the rest of this summer will be to somehow find my way back to the good habits I had managed to develop earlier this year in balancing translation and my own writing. It will be a challenge, since we have multiple visits from the States in the upcoming weeks, starting with my brother on Saturday. Habits are powerful things, as Kait Nolan pointed out. I’ve read that it takes 21 days to create a habit — for good or for ill.

It will be difficult to find those 21 days to get back to the good habits I lost, but I’m determined to find a way, especially given how frustrated I’ve been in recent weeks. Recently I’ve been cutting back on social media, and I’m seeing the first positive effects. The translation was up in the last week, and I’ve gotten a lot of my hard copy notes on Facets of Glass and Shards of Glass (the follow-up books to Island of Glass) into my Scrivener file, resulting in a nice jump in word count. Wish me luck in keeping that up!

Goals for this round:
Writing:

– Revise “Pool of Souls” and send it out

– Schedule ongoing promotions for my books

– Publish Almost All the Way Home From the Stars to Createspace

– Publish “Starting Out as an Indie Author” as ebook

– Publish “The Shadow Artist” as ebook

– Put together collection of my writing articles with Jay Lake

– Put together collection of fantasy stories with Jay

– Write newsletter update for my subscribers

– Find more reviewers for CIAM and Island of Glass

To wrap up, here one of my favorite distractions, my granddaughters: 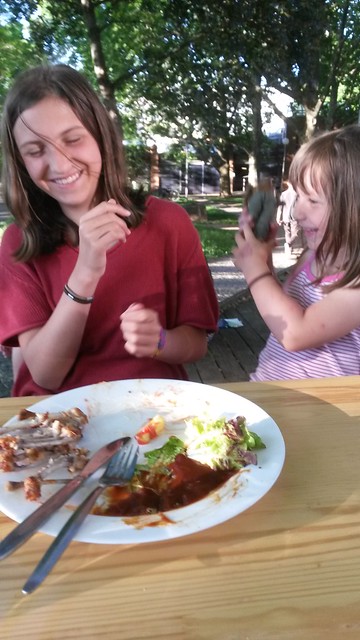 Random weird fact: the summer sweater Lisa is wearing is something she chose to save from my old stuff, one of my favorites in (much) skinnier days. Hard to imagine it ever fit me at all as an adult, when I see it on a 13-year-old!

I’ve taken a rather extended break from blogging, for a number of reasons, the only one that is relevant being that I had enough distractions and I wanted to get some writing done. And I have made progress on a couple of projects, despite very full days. I mentioned a while back that I wanted to make a stand-alone version of an episode from Shadow of Stone, and I finished a first version of “Gawain and Ragnell” with it’s own chapter breaks and appropriate quotes from Arthurian literature. While writing the episode originally, I took my inspiration both from the tradition of the “loathly lady” as well as “Gawain and the Green Knight” and a few other medieval tales of Gawain, conflating them all to what I hope I made into a coherent whole. None of the readers of Shadow of Stone have complained yet, so I think I must have been at least partly successful. 🙂

I’ve also returned to A Wasted Land, trying to make sense of the notes and scenes I wrote in March. I printed everything out, cut pages off at scene breaks, kept the pieces of scenes together with paper clips, and started reorganizing everything, moving scenes around and writing scene descriptions on separate pieces of paper in long hand (purpose, who, when, where, what happens, decision), and adding those guidelines to the cut up pieces of paper from the original scene. Doing all this, I realized I had some major flaws in chronology, which I hope my current pile of paper will correct. I’ve now started writing the new version, but I don’t have much in terms of words: only 1200 so far. And I have signed up for the Clarion West Write-a-thon again this year, with my goal being 30,000 words on A Wasted Land by the end of July. AND we will be going on vacation in a couple of weeks, so I should try to get most of those words done before that …

For the curious, here’s the cover:

I want to try to some new fast writing techniques this round anyway, testing what works for me, so it’s all a part of the plan. *g* I’ve read a lot of blog posts and Kindle Board discussions on increasing your output, and I’m at least ready to give it a shot.

No matter what I manage for the write-a-thon, my main goal for the quarter will be to finish a complete draft of A Wasted Land. I’m trying to learn from my previous publishing mistakes, and this book is planned more modestly, with fewer sub-plots, etc. I’m shooting for a first draft of no more than 50,000 words.

This quarter, I also want to do another pass of Gawain and Ragnell, make a cover, publish it, and try to make it free on Amazon.

I’ve started posting Island of Glass to Wattpad, and I want to continue testing such platforms. (Island of Glass is another priority, but I’m a firm believer in letting a work sit before rewriting.) This round, I really want to try and make the writing a priority, as long as life allows.

I have a bunch of “maybe” publishing and writing goals, but those really depend on how far I can get on A Wasted Land. Given how atrocious sales of short story collections are these days, I’ve given up on collections of my previously published stories for the time being.

I wish everyone a very successful round!

(For those who don’t have it yet, Yseult is presently on sale for only 99c.)