One of the things I’ve had on my to-do list for at least a year is to upload my short story “Mars: A Traveler’s Guide” to Amazon and make it free. The story is also in my collection From Earth to Mars and Beyond, and I’ve been thinking that I should redo the Mars ebook with an excerpt from one of the stories in the collection in the back matter to entice a few readers to buy more. “Mars: A Traveler’s Guide” is hands down my biggest “seller” on Smashwords, but just sitting there as a free short story without any incentives anywhere in the text to buy anything else from me doesn’t seem to be inspiring those who download it to go looking for opportunities to purchase my fiction.

Since I’ve had fairly good experience with the free story “Gawain and Ragnell” to keep my sales of The Pendragon Chronicles alive, I was hoping I could do the same thing with “Mars” for my SF collections. But when I went searching for the PSD of the original cover to edit it for recent standards and add the Nebula nom to the cover, I couldn’t find the file, nor could my daughter. She suggested that maybe it was time for us to make a new cover for the story anyway, since it was one of the first we did together, and reflects that. So that’s what we did. Here’s the new cover we came up with: 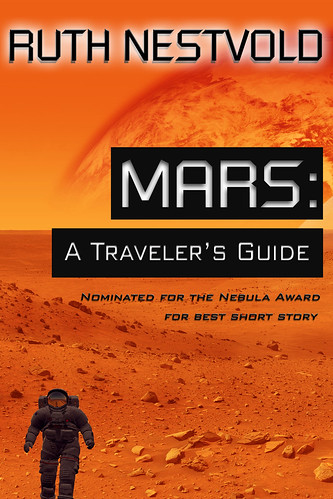 And here’s the old cover we did back in 2011, for the sake of comparison: 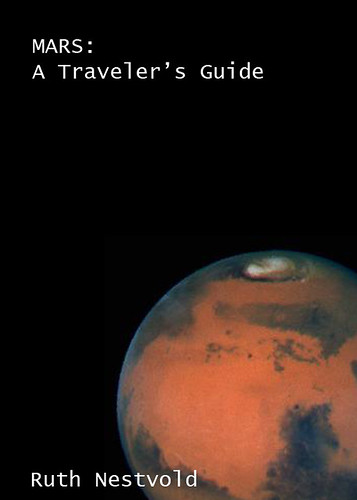 I’d love feedback on the new cover! And if you’ve already read the the story, so much the better. 🙂

After completing the first draft of Island of Glass, I started on revisions of Chameleon in a Mirror, my popular literature homage to Aphra Behn. Commercially, this one will probably be a washout, since it’s balancing on so many chairs, and none of them comfortably. The subject matter is literary history, but the approach is conventional, accessible, with nothing much innovative to challenge the reader. I certainly don’t have anything against innovation — I’ve written hyperfiction, after all, and the single Nebula nomination I’ve garnered was for a short story told in a series of computer database entries.

But the thing is, even though she was revolutionary, the first professional woman writer in the English language, Aphra Behn was nothing if not accessible. Her plays drew large crowds. Certainly, she messed with the conventions of her male contemporaries, she did wonderful things with the trope of the innocent heroine, and she made the bad-girl whore so sympathetic, it makes it hard to root whole-heartedly for the spunky heroine. But while she wrote the first epistolary novel in the English language, she wasn’t experimenting for experiment’s sake, she was venturing in to a new medium, the long prose narrative, and trying to find an effective way to tell a story.

I think I’ve mentioned before that I regard Aphra Behn as the Steven Spielberg of her era. So while some might think a “literary figure” like Aphra would deserve a “literary” treatment, I think she deserves a gripping plot with lots of twists and turns and surprises, just as she once delivered to the Restoration audience of the Duke’s Company. I doubt if my time travel will do her justice, and it will probably suffer just as much from too much Literature as it will from not enough Literariness. As if that weren’t enough, it’s undeniably a stand-alone novel — there is no way I can turn it into a series. Which is the form which seems to be most likely to lead to success in this brave new publshing world.

But it’s important for me to finally finish this project of my heart, and I’m glad to be working on it again.

I did lose a day with a stupid mistake — the version I started editing at first was an older version that apparently I had open to consult while I wrote the new version last year. It took a couple of hours of frustration with myself at the writing being so much less polished than I’d expected before I checked the directory again and found the REAL new version. Sigh. I must find a better method of naming my files, obviously. But at least now I’m a little more inclined to believe that I really am still capable of learning as a writer and haven’t hit some kind of wall where I can’t see my own mistakes. 🙂

Despite the false start, I’ve managed to revise 70 pages of 350 this week (a manuscript of 110,000 words total). I’m good with that. I’ve also been working on the next group promo, which I will officially announce tomorrow. Watch this space!

I also spent most of a day creating a new page on my blog for my books. If you have time, please check it out and tell me what you think!

Wishing everyone a very productive and successful week. 🙂