Last week, I had a 99c sale for Yseult running, for which I took out several paid ads — none of them BookBub. *g* I promised to provide a summary of the results once the promo was over.

Here are the ads I took out and the dates they appeared:

For the week, I spent a total of $98 for advertising. At the beginning of the promotion, Yseult was at #511,349 on Amazon.com. The highest it reached during the week of the promotion was #7,555 on Sept. 3, according to the sales info on Author Central. Here is one of the better results caught as screenshot: 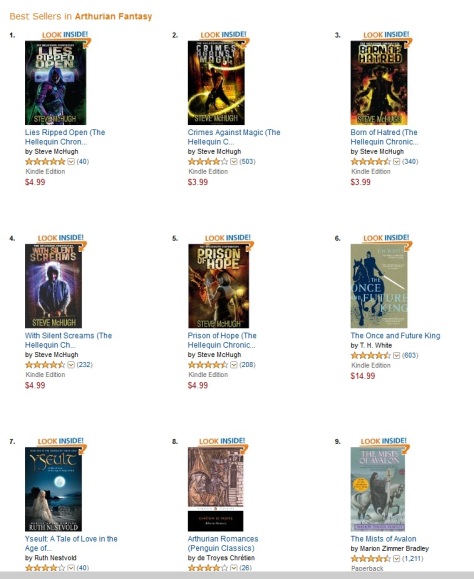 It actually made it up to #4 in Arthurian Fiction at one point, but I forgot to take a screenshot. 🙂

Here is how the sales during the week broke down:

Between Aug. 31 and Sept. 2, before the Books Butterfly ad came out, I had 38 sales in the US and 2 in the UK. Before the ads came out, there were 2 sales. So I’m sure that most of those sales were a result of the ads, but since they were all on the same day I’m not sure exactly where the sales came from. Nonetheless, excellent ROI, and well worth using again. Perhaps next time on different days, so that I have a better idea which ones work best.

After the Books Butterfly ad, I had another 47 sales in the US and 4 in the UK. In absolute terms, that means I lost money, but it is also the ad that pushed my visibility up the most and got me into some top ten lists.

After the BargainBooksy ad, I sold another 30 copies of the book in the US and 1 in the UK. For me, in terms of ROI, this was the least effective of the ads I took out.

As I mentioned last week, I deliberately spaced the more expensive paid ads with a day in between so that I’d have a better idea of their effectiveness. When I’ve tested ads before, I’ve tended to do a different ad every day, which makes it more difficult to figure out which ads got me the sales, since there is always spillover.

To my way of thinking, with my limping sales in the past months, this promo was a definite success. Not only did I sell over 130 copies of the book (meaning I recouped the costs of the ads), I also sold several copies of Shadow of Stone, #2 in The Pendragon Chronicles, and paperbacks of Yseult as well — something that hasn’t happened in a long time. 🙂 Even my freebies in the series have a lot more downloads now than they did this time last month.

And now that the book has returned to full price, I’ve made a couple more sales, and seem to have several readers borrowing it, to judge by the pages read in my dashboard.

I promised to compile these results with those of other 99c sales I’ve done, but it’s late now in Central Europe, and I think I’m going to save the summary post for next week.

Anyway, I’m very happy with the results, even if some of them were quite different than expected. But I’m paying for that as well, and will know better what to use next time I schedule a promo for one of my books. 🙂

I promised to report the results of my free run last week with my time travel novel Chameleon in a Mirror.

In one word: mixed.

Altogether I managed to give away over 2000 books, many in places where I’ve never sold anything before. The only Amazon store where CIAM didn’t get any downloads was Mexico. And that was all without spending a dime, only announcing the free run on my blog and through the free sites listed here. On Amazon.de, CIAM even managed to stay in the Top 100 free overall for over three days. Today, the novel is in two Top 100 categories on Amazon.com:

The book had several borrows immediately after the free run, which has led me to re-enroll it in KDP Select. As long as it is still visible, I might manage to get a few more borrows.

So why is that mixed? CIAM is pretty far down in the top 100 categories it managed to get into, which means it will probably drop out of sight again fairly quickly. And in marketing books, everything is about visibility. If no one sees your book, no one will buy it.

On Amazon.de, despite being in the Top 100 overall for several days, CIAM is not in a single Top 100 category right now.

But I’m still hoping that all the downloads will lead to a few more reviews.

For my next experiment, starting Wednesday, I will be trying another Countdown Deal, this time with my short story collection, The Future, Imperfect.

The Future, Imperfect has a couple of strikes against it, the main one being that as a short story collection, it has gotten several bad reviews from readers who objected to the short stories being short. I’ve had reviews like that for all of my short story collections by now, so I’m used to it. Unfortunately, it makes it next to impossible to advertize those books, since most sites require an average rating of at least 4 stars.

Thus, comparing results would be like apples and oranges. Instead, I just want to see what strategies might possibly work to get my books selling again.

So remember, if you like dystopian fiction and you read short stories, The Future, Imperfect, will be on sale for 99c from Oct. 22 – Oct. 27. 🙂