This week, I’m giving away books again, science fiction stories and a novella this time.

The Future, Imperfect is a collection of near future, dystopian short stories by Ruth Nestvold. Environmental changes — slow in some regions, catastrophic in others — have had a major effect on our world, not for the better. While water wars and pandemics have devastated the Mediterranean region, and a major earthquake and the resulting destruction of nuclear power plants and sensitive research facilities have made much of California a wasteland, corporate-sponsored enclaves defend themselves from the have-nots. What can any one individual do to make a difference is such a world? These are the stories both of those who tried and those who failed.

Five of the short stories in this collection were previously published in such venues as Asimov’s and Futurismic. “Exit Without Saving” also appeared in Rich Horton’s “Science Fiction 2007: The Best of the Year.” “Killfile” is an original publication.

It will be FREE through Friday, Jan. 23. 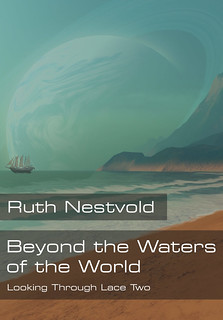 The Allied Interstellar Community first contact team on the planet Kailazh is faced with even more challenges than most. But dealing with an alien culture is not only difficult for those who arrive on a foreign world. What of the inhabitants of the planet, who now have to deal with realities so strange to their way of thinking, it will have an impact on everything they believe?

Kislan is a factor in his family’s shipping company, a man who has seen many ships arrive at the docks of Edaru from many different cities, who deals with foreign goods from all over the known world. But the ship that arrives from the stars brings more than exotic innovations, it brings ideas that will change his life.

And it brings the beautiful ambassador from the stars, Toni Donato.

Beyond the Waters of the World is the second book in the Looking Through Lace series. It will be free today and tomorrow, Jan. 20.

If you don’t have them yet and are so inclined, grab yourself a copy or two!