As a result of a week spent traveling around England, I’m a bit behind in my word count goals for the round so far. I’m shooting for 2500 words a week, and the first two weeks in July only added up to 4000 words total. But I’m confident that I can make make good on those missing words, especially since this week has started out so well — 1600 words total for Monday and Tuesday.

I also completed one of my goals and posted the reports from my trip to my blog. If you missed those and are curious, they begin here.

Now on to WIPpet Wednesday! I will continue where I left off in A Wasted Land two weeks ago, with Taliesin and Kustennin being led into the presence of Cerdic, a British war leader who has allied himself with the Saxons. Since today is the 16th, I give you 16 short paragraphs:

Kustennin tightened his hold on the strap of the drums he carried. That was the last thing they needed, someone who might uncover their magic and see through their illusion. They were relying on their special abilities to get them out of this expedition alive.
But Cerdic still leaned back on his elaborately carved chair several steps above them. Intertwining fantasy beasts competed with each other for dominance on the arm rests and the top of the wooden frame above Cerdic’s head, so different from the streamlined elegance of the furnishings in the villas and hill-forts where Kustennin had grown up.
Cerdic’s lips curled up in a hint of a smile. Despite the magic Taliesin had sensed, it appeared no one had betrayed them to him yet.
“Yes, and who am I?” Cerdic asked.
“The ruler of Venta?”
Laughter broke out in the hall.
“Well deduced, bard.” The near-smile disappeared, and Cerdic leaned forward, his elbows on his knees and his hands clasped. “I ask myself where you have been for the last few years, coming here with the songs you were singing in the market of Venta.”
Taliesin rubbed his chin. “Something tells me this is a trick question. I have been many places, Lord of Venta. For a time I was in the court of Maelgwn of Gwynedd, and that of his uncle, Owain of Rhos. I have also had the honor of playing for Morgan of Powys and his sons. Besides that, our troupe has played at markets all over Britain.”
Kustennin admired the way Taliesin mentioned only kings who had held themselves out of the recent wars and sent no fighting men to support Arthur in his nephew’s rebellion. The bard’s answer gave the lie to his implied claim to be ignorant of politics — on the contrary, it was proof of how well versed he was in the power structures of Britain.
Cerdic motioned to the tall redhead who had spoken to them at the market. “Nerienda, come forward, please.”
Nerienda? The woman was Cerdic’s daughter? Then they were surely lost. Kustennin recalled rumors of Nerienda losing her wits after her husband died fighting against her father. As that obviously was not the case, Kustennin could only presume that her marriage had been part of Cerdic’s plan all along, and she was his accomplice in increasing his power base.
She stepped up to Cerdic’s self-appointed throne. “Yes, father?”
“Does the bard tell truth?”
She bobbed her head. “He tells no lies, my father.”
She is the source of the magic, Taliesin whispered in his mind.
And she had just saved them. But why?
Nerienda turned and looked at him. To have you in my debt. 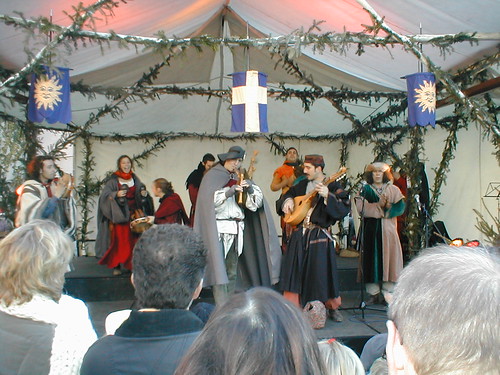