As many of you following this blog know, I started my career as an indie author after I got the rights back to the original English of my novel Yseult, which was published in German as Flamme und Harfe by Random House Germany in 2009.

I published the English original in January 2012 on my own with this cover from the talented Derek Murphy of CreativIndie Covers:

Since the original publisher of Yseult / Flamme und Harfe, Random House Germany, told me they were interested in a sequel (which they decided they were not interested in after all), when I published Yseult, I already had the next doorstopper waiting in the wings, Shadow of Stone, which I published in June of 2012.

That too sold quite well, and I began to imagine that I was on my way to a wonderful career as an indie author.

Readers started wanting to know when the next “installment” would be available. Of books that were both close to 200,000 words, or over 500 pages long. Unfortunately, I don’t write fast enough to produce novels of that size every year, and I lost readers.

I started writing a prequel to The Pendragon Chronicles, Ygerna, hoping to make it free and attract more readers that way, but I soon noticed that the story of Arthur’s mother was too complicated for me to finish off in a couple ten thousand words, and it ended up on the back burner. I do have a free short story from the second novel available, Gawain and Ragnell, and that has helped my sales somewhat, giving potential readers a taste of the world of The Pendragon Chronicles. So I know for a fact that permafree can help your sales.

Then at some point I started noticing something new happening in ebook publishing: it seemed as if a lot of the most successful indie authors were publishing their ebooks in episodes or as serials, in chunks from between 50 to 200 pages. Like with a TV show, each episode might bring a single plot thread to a conclusion, but there was also often some kind of cliffhanger to make sure the reader came back for the next installment. An added advantage of the episode format is that the author can make the first “book” of the novel free in order to entice readers to give it a try.

Slowly an experiment started to take shape in my mind. I had these two Big Fat Fantasies, after all, together close to 400,000 words. But in the era of ebooks, when the reader can’t judge a book by how heavy it is in her hand, books seem to be getting shorter. And while the true short story has yet to make a comeback, readers appear to be increasingly accepting of novella-length books. (This is all totally subjective and unscientific, so don’t quote me on it.)

Anyway, as a result of these observations, I have decided to launch an experiment. I am going to take the four books of Yseult apart — which, btw, is how I organized the novel long before the advent of ebooks — and offer them separately. I will try to make the first book free on Amazon as quickly as possible. Here is the pricing structure I’m considering for the serial version:

My goal is not to make more money than with the complete novel, although that is what would happen if readers were only to buy the individual parts. But when I do this, I do not intend to unpublish Yseult. That will still be available for 4.99 for anyone who is enjoying the series enough to want to buy the novel. Mostly I’m just hoping that with parts 1 & 2 at free and 99c respectively, a few more readers will try out the series.

So recently I’ve been working on a template for the covers of the individual episodes. I wanted to use the cover of Yseult as a basis, to make sure that no one bought any of the episodes thinking it was a new story in The Pendragon Chronicles. At the same time, the covers should be distinctive enough to stand out from each other. Given those considerations, here’s the template I came up with for the series: 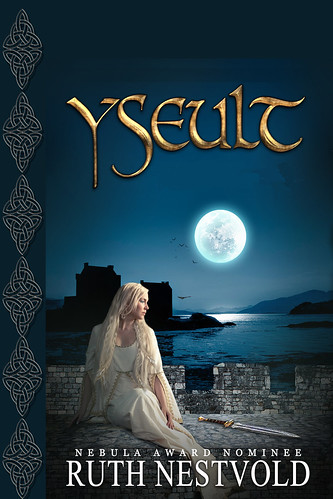 And here’s my first attempt at a single title: 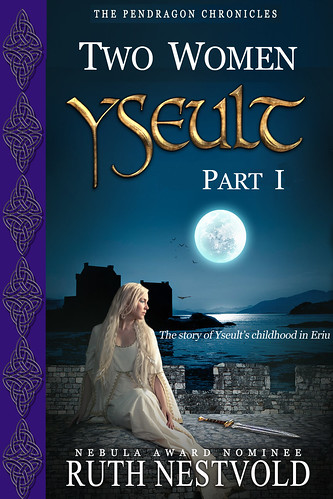 My thought is to use different colors beneath the “celtic fringe” *g* on the left / west side of the cover as a visual signal of the differences between the books. And now, as I write this, it occurs to me that the color for the first book, which takes place in Ireland / Eriu, should be a dark green rather than the dark purple I have now. *g*

Anyway, I welcome any thoughts / feedback you have in the comments below!

I might land flat on my face with this experiment, but I’m not out of much more than a couple days worth of work making the new covers, formatting the individual sections, and uploading them to the various venues. Wish me luck. 🙂 And do please let me know what you think!