As I’ve mentioned in my last couple of posts, I have once again switched from creative, “new words” mode to editing and formatting mode. But I think once I have Island of Glass published, my brain will be out of mourning enough that I can I can get back to creating new words on a fairly regular basis. On Saturday, I woke up dreaming about the story I want to write in the Villa Diodati shared world that I mentioned here. That inspired me to call up the file, and I added nearly 500 words to my tale.

Other than that, this week I’ve been beta reading and putting together the glossary, author notes and other back matter for Island of Glass. All of that did actually add up to 2200 new words — just not fiction. Still, together that gives me 2700 words for the week, much better than I expected.

I also made a map for Island of Glass. As a basis, I used Ignazio Danti‘s 16th century map, pretty close to the era in which my story is set: 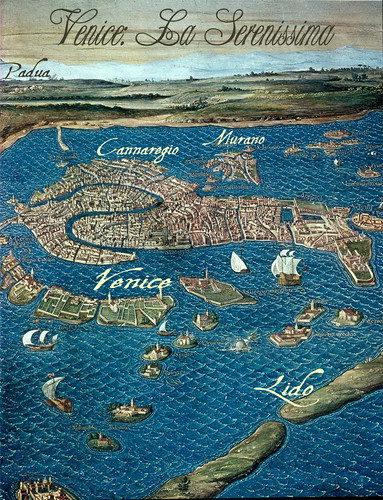 So what do you all think?

I also write a description for the book. I’d love feedback on this as well:

Seventeen-year-old Chiara Dragoni is a master glassmaker of Venice, a position that is both a privilege — and a trap. For the glassmakers of Murano are forbidden to ever leave the islands of the Venetian lagoon.

When Chiara’s uncle is caught on the mainland and thrown into the dungeon of the Doge’s Palace, she must use all her talents, including magic, to help free him. But the gift she creates for the ruling prince of Venice has unintended consequences, and now Chiara must decide whether to give up everything — and everyone — she knows and loves to save her dream.

Wishing everyone a wonderful and productive week. Me, I’m hoping it cools down a bit here in Central Europe. Right now, we have all the blinds down to keep the heat out, and it’s kinda dark in here …

I’m still working on (hopefully final) revisions for Island of Glass. With my daughter visiting, there’s a lot less time for writing and translating, and the translation job has to come first. So this week, my WIPpet will again be from my glassmaking fairy tale.

Last week, someone said they would love to see the shoes, and I promised to provide a description. Now this is certainly a lovely glass slipper, but Chiara’s is even cooler:

I want to provide the description of Chiara’s art, but at the same time, I want to move the story forward a little bit. So this week I’m going to give you two short excerpts from the novella, 4 paragraphs each for the month, 4 from the completion of the glass shoes, and 4 from the scene of the prince’s reaction to the gift:

“Pasquale, could you heat the millefiori rod for me? I want to make a rosette for the front of the shoe.”
He grinned and pulled on an apron. “As the maestra commands.”
She extended the shoe into the heat again, while Pasquale prepared the rod that would become its laces.
When both of the glass evening slippers were completed, the workers in the hot shop stood back, admiring Chiara’s art. The blue glass of the shoes were decorated with glittering gems of clearest cristallo, and the rosettes at the front made of a mosaic of pure, colorless glass, combined with slices of colorful millefiori. The strips appeared tied together with the carelessness of a real shoe. The red heels had the exact curve of the elegant slippers preferred by the nobility of Venice.

So those are the glass slippers, and this is the way the prince reacts after receiving them. This snippet comes directly after the one I provided last week:

Chiara blushed, glancing at her footmen, his guards, and his secretary. They all stared into the distance with that lack of expression servants cultivated, as if they didn’t hear a thing. She knew that wasn’t true. Although the prince’s words had not been loud, they were easily audible to all in the room. But footmen and guards obviously did not matter to him — he treated them as little more than pieces of furniture.
He noted the direction of her gaze. “Do you want me to send them away?”
“No, please do not for my sake.” She tried to keep any hint of panic out of her voice.
He chuckled, placing the second slipper next to its mate on the gilded side table. “Most young women scheme for the opportunity to be alone with a prince of La Serenissima. Yet here you are, offered the chance, and you turn it down.”

My daughter arrived for a visit from the States on Monday, and this morning, she and I had the youngest in the family because of a strike in the city day care centers. In the afternoon, I did some translating, but then I had to take a break to sleep off the effects of having to look after an energetic four-year-old until early afternoon. In the evening, my daughter and I went out to dinner together to what has long been one of our favorite restaurants here, Stadtgraben. And it was wonderful as usual.

With everything that is going on right now, I’m still working on the latest revision round incurred by the comments of my last beta reader for Island of Glass. So since that’s all I’ve been doing creative writing-wise for the last week, I will be returning to the novella this week. Which is appropriate, since the original short story was inspired by a trip I took with my daughter to Venice almost a decade ago, where we stayed on Murano.

I was utterly fascinated by the history of glass we learned while we were there, and it inspired and fed into the story.

Anyway, I’m not going to give you any complicated math this week, just 26 sentences for the 26th day of the month. In this scene, Chiara has presented herself to Prince Vittore of House Foscari with the gift she made for him, inspired by the events of the last scene I shared:

Chiara bowed her head in acknowledgment. “May we inquire as to the exact nature of the crime of which he is accused?” she asked diffidently.
The prince laid the box on a table, removed the wrapping, and began to push aside the wood shavings. “Why, attempting to sell Venetian trade secrets, of course.”
Her heart sank, and she clutched her hands in the folds of her silk skirts. That was much worse than simply violating the ban on leaving the islands of Venice. “My uncle would never sell trade secrets,” she protested. “After all, it is in his own best interests if the glassmakers of Murano create glass that is in demand throughout the world. As long as we are the only ones with the knowledge to make cristallo, our wealth will continue to grow.”
“Then what was he doing on the mainland in Padua, can you tell me that?”
Chiara was considering the wisdom of pointing out that Padua was part of the Venetian Empire, when the prince pulled a velvet-wrapped bundle out of the box and pushed aside the fabric.
“Ah!”
Prince Vittore held the glass slipper up to the light streaming in from the high arcade windows, turning it in his hands to inspect her handiwork.
“It is one of a matching pair,” Chiara hastened to tell him.
“Beautiful,” he murmured reverently, and Chiara could feel her cheeks grow warm. He looked from the glass slipper to her face, his gaze intense. “From your hand, Maestra?”
She nodded.
“I’d heard rumors that the young maestra of the Fenice Glassworks did brilliant work.” He laid the shoe on a low table beside him and reached into the box for its twin. “Had I known how brilliant, I would have made your acquaintance long before this.”
He might be paying her a compliment, but she couldn’t help thinking that his voice had a slimy quality, reminding her vaguely of a reptile. “You do me too much honor, my prince.”
He pushed aside the velvet, his eyes still holding hers, and his expression had turned speculative. “Talented and beautiful,” he murmured. “A very intriguing combination.”

I have my final cover for Island of Glass. Now all I have to do is revise, send it off to beta readers, find an available editor, revise again, format, and publish …

If anyone is inclined to be a beta reader for a fantasy novella set in an alternate seventeenth century Venice and revolving around the glassmakers of Murano, please let me know! Right now, it’s in dormancy, an important step in my creative process, but I think after about another month, I’ll be ready to revise and then send off to my first readers.

Progress on Chameleon in a Mirror: I’ve completed revisions through chapter 13, of 31, which means I’m almost halfway through. Aphra Behn has just experienced the slave rebellion in Surinam that was the basis of her short novel Oroonoko, and is on her way back to England. My critique partner won’t have time to read it until April, but I still want to finish it as soon as possible, so that I have the whole book in mind while I do this pass.

The group promo this week was a lot more successful than the last one, but I’m not seeing much of a post-promo sales bump. At least I finally had some sales on Kobo and B&N. At some point, I will probably have some thoughts on things that could contribute to a successful group promo, but not today. 🙂